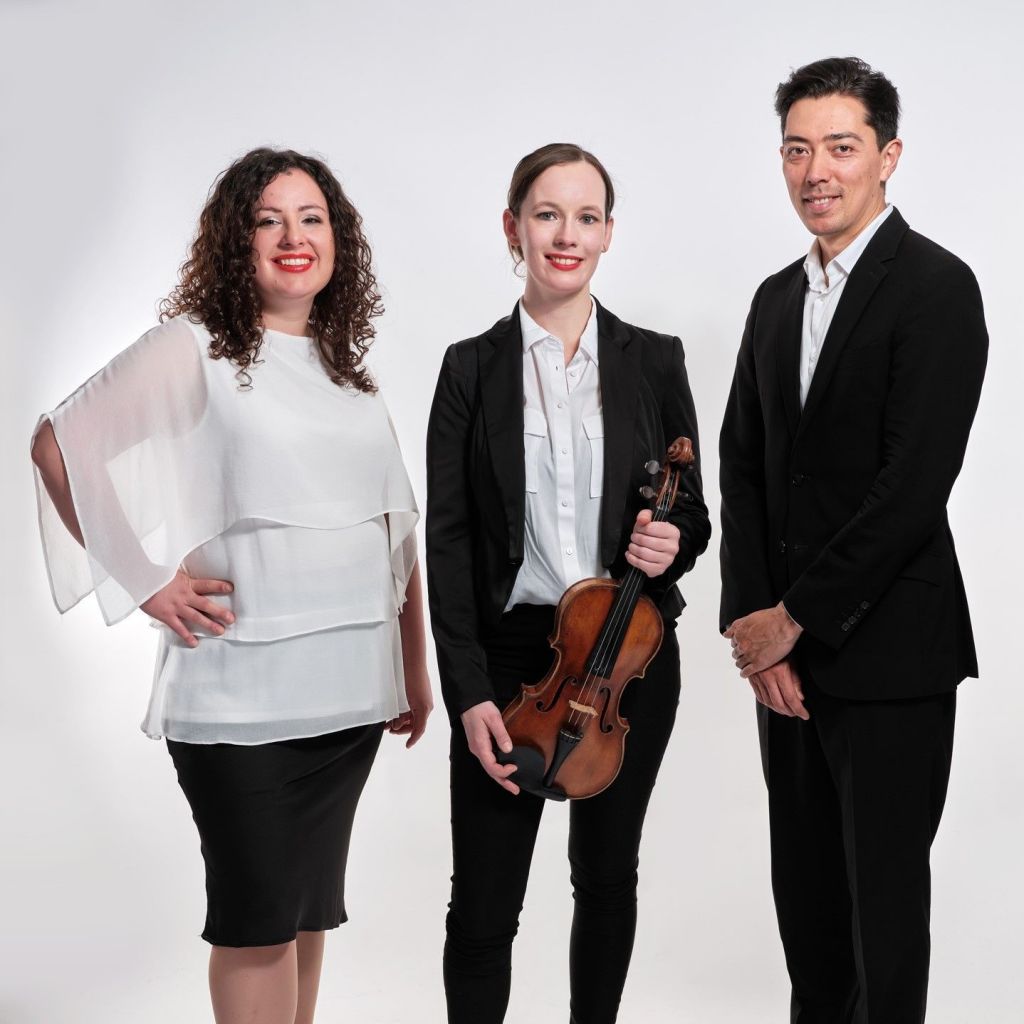 Named for Beethoven’s famous work for piano trio, Ghost Trio is made up of Gabriela Glapska (piano), Ken Ichinose (cello) and Monique Lapins (violin). The group was founded in mid-2019 as one of Gabriela’s PhD recital projects. Having quickly realised that they immensely enjoy playing together, they decided to continue working as a trio. All three are accomplished soloists and chamber musicians with diverse backgrounds. Despite their recent formation as a trio, they have already gained reputation as one of the most refreshing and enjoyable chamber groups in Aotearoa. The trio has focused on exploring a new approach to the greatest music written for piano trio, as well as the discovery of less-known contemporary treasures of the piano trio repertoire.

Monique Lapins: Second violinist of the New Zealand String Quartet since 2016, Monique has played around the world including festivals in the UK, France, the Czech Republic, Holland, Japan, Hong Kong and her homeland Australia. She studied at the Australian National Academy of Music on a full scholarship with William Hennessey, Howard Penny and Brett Dean, then at the Yong Siew Toh Conservatory of Music in Singapore. She subsequently won a position in the Hyogo Performing Arts Centre Orchestra in Japan, where she was selected to perform Bach’s Double Violin Concerto as soloist alongside Olivier Charlier. Monique is a lecturer in classical performance at the New Zealand School of Music as well as being Artist in Residence as part of the NZSQ.
Monique plays a 1784 Lorenzo Storioni violin, kindly loaned by David Duncan Craig as trustee of the Lily Duncan Trust.

Ken Ichinose: British cellist Ken Ichinose is a graduate of the Royal Academy of Music in London, where he studied with Paul Watkins. During his time there, Ken co-founded the Galitzin String Quartet with which he performed for ten years and completed major tours in the UK, Germany, Holland, Portugal and France. The Quartet were first prize winners of the 2007 Charles Hennen International Chamber Music Competition. Ken is also co-founder of an annual chamber music festival in Brignac near Montpellier, France. Before joining the New Zealand Symphony Orchestra as Associate Principal in 2014, Ken enjoyed 10 years freelancing with London orchestras including the Philharmonia, Academy of Saint Martin in the Fields, and the Royal Opera House, Covent Garden.
Ken plays on a Lorenzo Carcassi Cello, made in Florence, 1747

Gabriela Glapska is a Polish-born pianist currently living and working in Wellington. An active soloist and chamber musician with a strong interest in contemporary music, she has been the resident pianist for the annual Nelson Composers Workshops since 2017 and has collaborated with many award-winning composers on both solo and ensemble projects as well as with Wellington-based contemporary ensemble STROMA. She also has been working as an accompanist at the Te Kōkī New Zealand School of Music since 2017. As well as Ghost Trio, Gabriela has been a member of TrioNique, New Zealand’s only professional flute sax piano trio, since 2019.